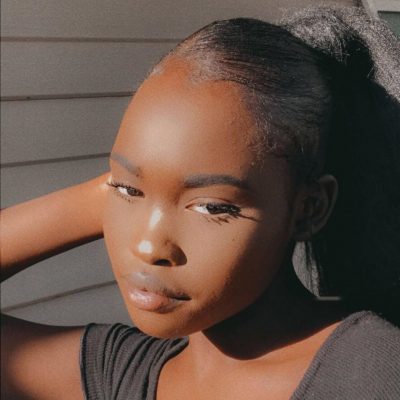 One of the best ways to elevate Black voices is to start by diversifying your own social media feeds—so here’s a list of Black influencers you need to follow right now. Let’s be honest, it’s about time we start highlighting these talented, inspiring creators:

Sarah Lugor is a 19-year-old TikTok content-creator who posts comedy and lifestyle videos for her 2.4 million fans. Her videos cover everything from sex jokes to singing to racial commentary that often draws on her first-generation Sudanese background. Sarah is hands down one of the most energetic and hilarious social media stars out there—and is stylish as hell.

Wisdom Kaye is a 19-year-old fashion and beauty influencer from Houston with an affinity for creating surrealist ‘70s looks with a modern twist. Since posting his first TikTok video in January, his account has grown to 3.4 million followers. In recent news, he was just named the best-dressed guy on TikTok by Vogue, and shortly after signed a deal with IMG Models.

Snitchery is the alter-ego of Eleanor Barnes, a 23-year-old biracial makeup guru, professional cosplayer, and anime enthusiast who first got her start on Instagram in 2014. Known for her shapeshifting abilities, she regularly posts tutorials that show not just the power of makeup to emulate plastic surgery but also the power of camera angles and modeling poses to morph your appearance.

Kane Caples is a 26-year-old non-binary skateboarder and fashion influencer from Riverside, California with over half a million TikTok followers. Inspired by the aesthetics of obscure anime, Kane’s colorful hair and clothes rebel against the conventions of skate culture. They sometimes even record videos alongside their pet pigeon. A vocal ally of the queer community, Kane is working to make the skating community a more inclusive space.

Check out Kane Caples’ fashion videos and skate tricks on TikTok and Instagram.

Jax James is a 17-year-old TikToker and social justice activist who uses her platform to uplift people of color and combat white supremacy. Her meaningful conversations about race—which often incorporate elements of humor—have amassed an audience of over 2 million followers.