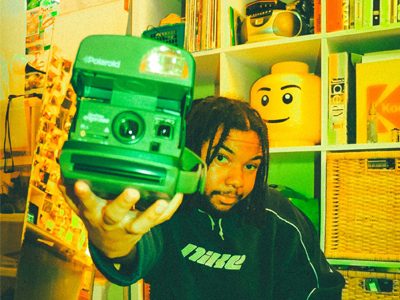 It’s no surprise that we’re entering 2021 with a more open mindset. Americans reckoned with police brutality and learned about the history of the police badge. Then all around the world people began protesting, allying with the Black Lives Matter movement, seeking justice for George Floyd’s murder. As time progressed, companies caught on that they must move with the times of representation and diversity—or they’ll be boycotted by Generation Z and millennials. The stories of the Black community are vibrant, soulful, and deserve to be told. Their stories will eventually change the collective consciousness as to who a Black individual is.

Photography not only expresses a story to the viewer but is used to inflict feelings that one wouldn’t have felt without the photograph. For Adolescent, I spoke with Lovesbond Uyanwune, a Nigeria-born photographer located in New York City. He offered not only insight into his work, which can be found here, but also a new perspective on what Black photography is.

Uyanwune emphasized that the stories being told about Black people are mostly only about their oppression and pain. What we see in theaters, music, and the news are tales of white supremacy and white-washed versions of equality under the law. Uyanwune’s photography aims to tell an entirely different story. When explaining his approach to his craft, he posed a question: “Once we break free from oppression, brutality, and pain, what will our lives look like?” He went on to elaborate that Black love, united Black families, and Black wealth aren’t represented. Black success stories aren’t commonly told in the media, which is why Uyanwune aims to make pieces about the future of Black lives.

As our conversation progressed we spoke about the revolutionary film Black Panther. Uyanwune, who was born in Nigeria but attended boarding school in London, wants to see his home country in the glory it deserves. His work aims to represent Black excellence within the community. Black excellence serves to prove not that Black individuals can be excellent but are.

In order to capture a moment and tell a story, Uyanwune stressed the importance of character development. Black photography, after all, gives Black people a chance to see themselves outside of stereotypes.