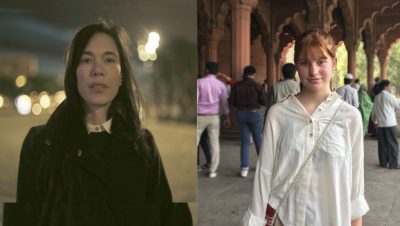 This article was originally published by Ramaa Mosley, Founder of Adolescent Content on Linkedin

Two months ago I was invited to speak at an advertising conference in India about being a woman director and founding Adolescent Content, a Global Creative Youth Studio that represents Creators in 15 different countries. The talk would be mostly centered around my work and my thoughts about reaching youth through advertising. I immediately said YES. I had always wanted to go to India. And to speak about the company I founded was an awesome opportunity. As a business owner, I'm always looking for ways to authentically communicate the core value of what we do. As the date for the talk came closer and closer, I suddenly found that the week I was supposed to go to India was being challenged with a handful of project pitches and a NY trip to meet with ad agencies and investors. After a long talk with my business partner Hope Farley we realized I couldn't be in two places at once (sometimes I can pull off that miracle but not with 24 hour plane flights). I started thinking about who else could go in my place - should it be one of our other executives? What was the most authentic way to communicate the message about our brand? It quickly became obvious to me - who better to talk about our amazing young Creators than a teen? I called up 15 year old Amelia Conway. Amelia signed with Adolescent in 2013 at 11 years old and had been working steadily as a youth director since then; she has directed multi-million dollar campaigns for Target, directed projects for Nascar, American Girl, and recently gave a Ted Talk about ageism! Both Amelia and her mom Christina were incredibly enthusiastic. Amelia would undertake this job and escorted by Christina would fly to India to give the talk. Amelia began working on her speech, sending outlines and filling in the details day after day. She was diligent in crafting her message, which was an amazing combination of the story of how she became a director at 11 and a detailed approach about how to reach the GenZ audience from her perspective.

I'm constantly shocked at how little adults listen to teens. Many agencies have come to us with studies about youth, claiming they are self absorbed and superficial. This couldn't be further off the mark. Working with hundreds or teens every day, I can tell you they are predominantly responsible, focused, hardworking and obsessed with the most thought-provoking issues of our time. They have unique perspectives that most adults miss. They are capable of coming up with creative solutions and answers to complex problems. They have meaningful things to say and they are a force to be reckoned with. We could come closer to solving so many of the problems facing our world if we approached issues with the open-mindedness, curiosity and unique perspectives that teens have. Most importantly, teens are largely optimistic about the future and have high ambitions to better the world. They aren’t afraid to tackle some of the most controversial topics such as gun control (as we've seen from the youth in Florida) or LGBT rights. They don't even need us adults to give them the opportunity, they already own the means of distribution. They use their platforms to put the spotlight on things that really matter to them. Most importantly, every brand in the world is competing with these teens for eye balls - and there's no question the teens are winning.   Yesterday, Amelia gave her talk before a huge audience and received a standing ovation. I realized once again: As much as we tell brands that in advertising we need to offer viewers value, WE as companies in the industry (that make those videos) need to ad value when talking about ourselves. We need to entertain, delight and educate potential customers - and we need to do it authentically so that the essence of our own brand is communicated. That's why I sent a girl to do a woman's job.